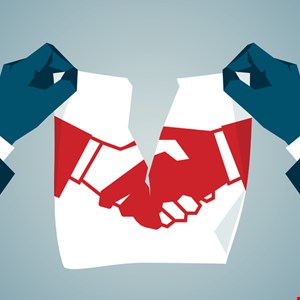 The Biden administration has announced the cancellation of a $10bn massive cloud-computing contract awarded to Microsoft.

Yesterday the DoD issued a statement declaring that the contract had passed its sell-by date and was no longer relevant.

“The Department has determined that, due to evolving requirements, increased cloud conversancy, and industry advances, the JEDI Cloud contract no longer meets its needs,” read the statement.

It continued: “The Department continues to have unmet cloud capability gaps for enterprise-wide, commercial cloud services at all three classification levels that work at the tactical edge, at scale. These needs have only advanced in recent years with efforts such as Joint All Domain Command and Control (JADC2) and the Artificial Intelligence and Data Acceleration (ADA) initiative.”

At the same time as the JEDI Request for Proposals (RFP) was trashed, the DoD announced its intention to seek proposals from AWS and Microsoft Corporation to fulfill a new multi-cloud/multi-vendor Indefinite Delivery-Indefinite Quantity (IDIQ) contract called the Joint Warfighter Cloud Capability (JWCC).

The DoD said it would consider proposals from other firms if they were capable of meeting the brief.

“JEDI was developed at a time when the Department’s needs were different and both the CSP’s technology and our cloud conversancy was less mature,” said John Sherman, acting DoD chief information officer.

“In light of new initiatives like JADC2 and AI and Data Acceleration (ADA), the evolution of the cloud ecosystem within DoD, and changes in user requirements to leverage multiple cloud environments to execute missions, our landscape has advanced and a new way ahead is warranted to achieve dominance in both traditional and non-traditional warfighting domains.”

Alex Rossino, a federal market research analyst at Deltek, commented that having more than one cloud contractor could create challenges.

“The complicating factor in all of this is the issue of interoperability between the new systems,” noted Rossino.

“The DoD will need to ensure that the data in one cloud can be easily accessible to the other.”