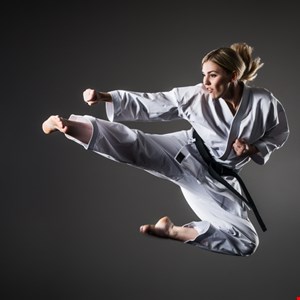 The owner of a martial arts academy in Florida is in custody after allegedly installing hidden cameras in the restroom to spy on students.

Police in Broward County arrested 64-year-old martial arts instructor Robert Danilo Franco on Friday. An investigation was launched after a 17-year-old female student spotted the devices and tipped off police.

Investigators said the student discovered two cameras hidden inside picture frames that were placed on a shelf in the bathroom at Master Franco’s Taekwondo Academy on Pines Boulevard, Miami.

After photographing the cameras, the student confronted Franco, who then allegedly destroyed the frames and cameras. The student then walked out of the academy and called her father, who came to meet her and called the police.

Franco surrendered himself to the Broward County Jail on August 6 after a warrant was issued for his arrest.

Local10 news reported that a search of the martial arts instructor’s phone and computer by law enforcement revealed content featuring children and adults.

Authorities think Franco may have been filming people without their consent since March 2021 when he took over the martial arts academy.

Pembroke Pines Police reportedly said that Franco provided them with an explanation regarding the presence of the cameras in the bathroom, but officers did not deem the explanation to be plausible.

“The Pembroke Pines Police Department fully anticipates more victims to come forward,” said Captain Adam Feiner with Pembroke Pines PD. “We haven’t identified them yet and need the community’s help to do so.”

The police are asking anyone who used the restroom at Master Franco’s Taekwondo Academy, or whose children attended or visited the academy and used the bathroom, to contact Detective Jacob Childress at the Special Victims Unit at 954-743-1637.

Franco was charged with three counts of video voyeurism and one count of tampering with or fabricating physical evidence. His bond was set at $20,000.

A media release by the Pembroke Pines PD praised the actions of the teenager who allegedly discovered the cameras.

“The courageous actions of the juvenile student led to a thorough examination of all aspects of this investigation, the seizure of evidence, and ultimately an arrest warrant,” read the statement.