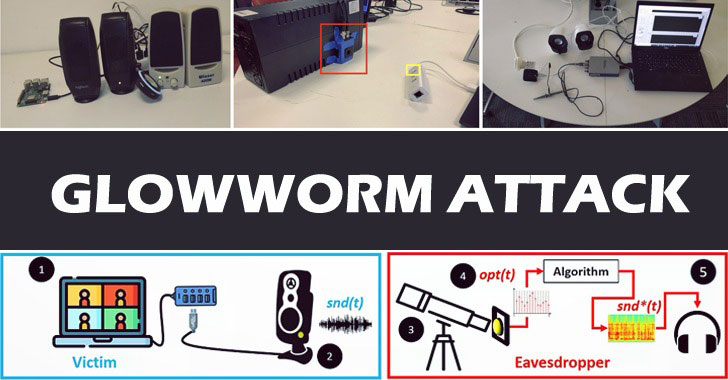 A novel technique leverages optical emanations from a device’s power indicator LED to recover sounds from connected peripherals and spy on electronic conversations from a distance of as much as 35 meters.

Dubbed the “Glowworm attack,” the findings were published by a group of academics from the Ben-Gurion University of the Negev earlier this week, describing the method as “an optical TEMPEST attack that can be used by eavesdroppers to recover sound by analysing optical measurements obtained via an electro-optical sensor directed at the power indicator LED of various devices.”

Accompanying the experimental setup is an optical-audio transformation (OAT) that allows for retrieving sound by isolating the speech from the optical measurements obtained by directing an electro-optical sensor at the device’s power indicator LED.

TEMPEST is the codename for unintentional intelligence-bearing emanations produced by electronic and electromechanical information-processing equipment. Glowworm builds on a similar attack called Lamphone that was demonstrated by the same researchers last year and enables the recovery of sound from a victim’s room that contains an overhead hanging bulb.

While both methods retrieve sound from light via an electro-optical sensor, they are also different in that while the Lamphone attack “is a side-channel attack that exploits a light bulb’s miniscule vibrations, which are the result of sound waves hitting the bulb,” Glowworm is a “TEMPEST attack that exploits the way that electrical circuits were designed. It can recover sound from devices like USB hub splitters that do not move in response to the acoustic information played by the speakers.”

The attack hinges on the optical correlation between the sound that is played by connected speakers and the intensity of their power indicator LED, which are not only connected directly to the power line but also that the intensity of a device’s power indicator LED is influenced by the power consumption. What’s more, the quality of the sound recovered is proportional to the quality of the equipment used by the eavesdropper.

In a real-world scenario, the threat model takes aim at the speech generated by participants in a virtual meeting platform such as Zoom, Google Meet, and Microsoft Teams, with the malicious party located in a room in an adjacent building, enabling the adversary to recover sound from the power indicator LED of the speakers.

Although such attacks can be countered on the consumer side by placing a black tape over a device’s power indicator LED, the researchers recommend device manufacturers to integrate a capacitor or an operational amplifier to eliminate the power consumption fluctuations that occur when the speakers produce sound.

“While the cost of our countermeasures might seem negligible, given the likelihood that the devices are mass produced, the addition of a component to prevent the attack could cost a manufacturer millions of dollars,” the researchers said. “Given the cost-driven nature of consumers and the profit-driven nature of manufacturers, known vulnerabilities are often ignored as a means of reducing costs. This fact may leave many electrical circuits vulnerable to Glowworm attack for years to come.”