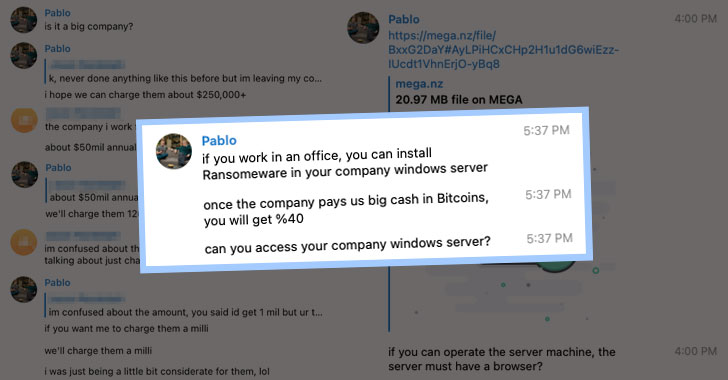 A Nigerian threat actor has been observed attempting to recruit employees by offering them to pay $1 million in bitcoins to deploy Black Kingdom ransomware on companies’ networks as part of an insider threat scheme.

“The sender tells the employee that if they’re able to deploy ransomware on a company computer or Windows server, then they would be paid $1 million in bitcoin, or 40% of the presumed $2.5 million ransom,” Abnormal Security said in a report published Thursday. “The employee is told they can launch the ransomware physically or remotely. The sender provided two methods to contact them if the employee is interested—an Outlook email account and a Telegram username.”

Abnormal Security, which detected and blocked the phishing emails on August 12, responded to the solicitation attempt by creating a fictitious persona and reached out to the actor on Telegram messenger, only to have the individual inadvertently spill the attack’s modus operandi, which included two links for an executable ransomware payload that the “employee” could download from WeTransfer or Mega.nz.

“The actor also instructed us to dispose of the .EXE file and delete it from the recycle bin. Based on the actor’s responses, it seems clear that he 1) expects an employee to have physical access to a server, and 2) he’s not very familiar with digital forensics or incident response investigations,” said Crane Hassold, director of threat intelligence at Abnormal Security. 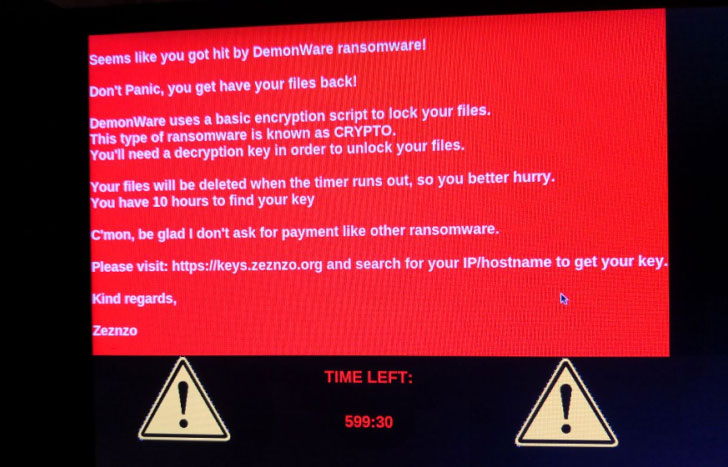 Besides taking a flexible approach to their ransom demands, the plan is believed to have been concocted by the chief executive of a Lagos-based social networking startup called Sociogram, with the goal of using the siphoned funds to “build my own company.” In one of the conversations that took place over the course of five days, the individual even took to calling himself “the next Mark Zuckerberg.”

Also of particular note is the method of using LinkedIn to collect corporate email addresses of senior-level executives, once again highlighting how business email compromise (BEC) attacks originating from Nigeria continue to evolve and expose businesses to sophisticated attacks like ransomware.

“There’s always been a blurry line between cyberattacks and social engineering, and this is an example of how the two are intertwined. As people become better at recognizing and avoiding phishing, it should be no surprise to see attackers adopt new tactics to accomplish their goals,” Tim Erlin, vice president of product management and strategy at Tripwire, said.

“The idea of a disgruntled insider as a cybersecurity threat isn’t new. As long as organizations require employees, there will always be some insider risk. The promise of getting a share of the ransom might seem attractive, but there’s almost zero guarantee that this kind of complicity will actually be rewarded, and it’s highly likely that someone taking this attacker up on their offer would get caught,” Erlin added.

Record $3.8bn Stolen Via Crypto in 2022
GuLoader Malware Using Malicious NSIS Executables to Target E-Commerce Industry
SaaS in the Real World: Who’s Responsible to Secure this Data?
GitHub code-signing certificates stolen (but will be revoked this week)
Tracers in the Dark: The Global Hunt for the Crime Lords of Crypto