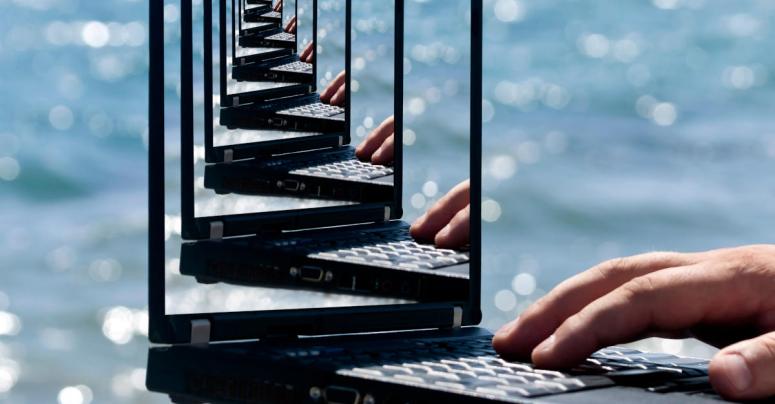 You must have had that happy feeling (happiest of all when it’s still a day or two to payday and you know that your balance is paper-thin) when you’re withdrawing money from a cash machine and, even though you’re still nervously watching the ATM screen telling you that your request is being processed, you hear the motors in the cash dispensing machinery start to spin up.

That means, even before any banknotes get counted out or the display tells you the final verdict, that [a] you’ve got enough funds, [b] the transaction has been approved, [c] the machine is working properly, and [d] you’re about to get the money.

Well, imagine that if you hit the [Cancel] button at exactly the right moment between the mechanism firing up and the money being counted out…

…and if your timing was spot on, then your card would stay in the machine, your account wouldn’t get debited, and you’d be asked if you wanted to try again, BUT YOU’D GET THE CASH FROM THE CANCELLED TRANSACTION ANYWAY!?!!?

And imagine that, as long as you kept pressing that magic button at just the right moment, you could loop back on yourself and layer ghost withdrawal on ghost withdrawal…

…until the machine finally ran out of money, or hit some internal software limit on recursive withdrawals, or you decided to quit while you were ahead and get clear of the ATM before an alarm went off.

They thought of that

Cashpoint machines aren’t infinitely wealthy, of course, because cash is bulkier than you might think, so if you didn’t get your card back and could only work this trick at one ATM, you’d briefly be rich, but you wouldn’t be an instant millionaire.

You might get away with somewhere between $10,000 and $100,000 (less in the UK, where cash machines generally only contain £10 and £20 notes), depending on the maximum capacity of the machine, the age of the banknotes (used money doesn’t lie quite as flat as crisp, uncirculated bills), how full the bank typically stacks that particular machine, and the time of day.

But in real life, it’s never (or almost never, given that “never” is a treacherous word in cybersecurity) going to happen that way, because your bank isn’t crazy: withdrawals follow a software engineering principle known in the jargon as ACID, which stands for atomic, consistent, isolated and durable.

Which is a fancy way of saying that you won’t get the money if the debit hasn’t been recorded against your account, and your account won’t get debited if the money can’t be dispensed: it’s always both or neither, never just one or the other.

(And you can bet your boots that if ever there were a glitch, it would almost certainly favour the bank, and you’d have to report the problem in person to get the machine checked out to confirm that the money didn’t actually emerge correctly.)

In boolean logic, you could describe this situation as (A AND B) OR ((NOT A) AND (NOT B)), or XNOR (the negation of exclusive or) for short.

Note. In the unlikely event that you ever receive more money from an ATM that you were expecting, for example if you withdraw £100 and get a wedge of ten £20s instead of £10s, or if your post-withdrawal balance shows up as undiminished even after you’ve just pocketed $500 from the machine, don’t assume it’s tough luck for the bank and thus that the money is a free gift. If it were a genuine mistake, and you jolly well knew it, you’ll almost certainly be found liable for the amount, given that you did, after all, receive it and keep it.

DeFi not quite so careful

DeFi, short for decentralised finance, is all the rage at the moment, especially in the form of unregulated cryptocurrencies and so-called “smart contracts”, which are essentially short programs – software code in which you express a sequence of trading commands – that operate automatically to shift your cryptocurrency holdings around in the ether.

The decentralised part, which is also the deregulated (or, more precisely, the unregulated) part, means that there are no “clearing houses” or traditional procedures that would be applied if you were operating through centralised banks.

In old-school banking, transactions are sluggish, and may require human approvals along the way, but can (at least sometimes) be reversed entirely if some part of the process goes wrong or is successfully contested.

Simply put, DeFi aims to avoid centralised control, to bypass the vested interests of existing financial insitutions, and thus to speed up and liberalise online trading,…

…while simultaneously removing a lot of the regulatory protection (and potentially ignoring centuries worth of operational wisdom) that you enjoy in the traditional, slow-coach banking world that DeFi fans aim to break away from.

You’d be unlikely to accept the fast-talking, modern coding motto of move fast and break things if you were relying on internet-enabled software to drive your car, design a bridge you’d have to use every day, or subject you to potentially dangerous medical intervention…

…yet in the finance sector, you’d be forgiven for thinking that this motto is the rule, rather than the exception.

Hundreds of millions missing in action

More than two weeks ago, for example, we described how a software design blunder led to the Chinese cryptocurrency exchange Poly Networks suffering a cyber-robbery of more than half a billion dollars ($610 million in total, apparently), until the hacker behind the heist somewhat reluctantly decided to hand back the funds, a process that apparently took until earlier today to complete.

On 2021-08-20, we wrote about a Japanese outfit called Liquid that apparently lost more than $100 million in an electronic smash-and-grab of its own.

That company – whose goal of keeping your cryptocurrencies liquid and tradeable as quickly as possible turned out to leave the company itself in a dangerously illiquid state – is only gradually getting going again, after assuring customers that they won’t end up out of pocket themselves.

Apparently, the company has rushed out a brand new security system for its cryptocurrency storage, and is now telling customers to “rest assured, […] our state-of-the-art [multi-party computation] technology ensures assets remain secure at all times. […] Your assets are safe with us and will always be.”

This week, it’s the turn of Taiwan-based cryptofinance company C.R.E.A.M. to suffer the shortcomings of smart contract software sloppiness, with a cyberthief allegedly making off with some $13 million in the crytocoins AMP and ETH.

We have stopped the exploit by pausing supply and borrow on AMP. No other markets were affected.

…“by way of re-entrancy on the AMP token contract”.

Re-entrancy, or recursion if you want to call it that, is a digital problem that’s very much like the unlikely cash machine withdrawal “trick” that we speculated about at the start of this article.

Don’t worry if you aren’t a programmer, because the overall misbehaviour should be clear: you’re accepting function calls to a smart contract called company.withdraw() where customers can specify an account to withdraw from, an amount to withdraw, and smart contract code of their own to be called to process the withdrawal of the specified amount.

After you’ve verified their balance can cover the funds, and permitted them to transact the approved amount, you then debit their account to reflect the money they just spent.

But this opens a hole in which the smart contract code provided in the user’s request can re-enter your own code, calling it recursively (i.e. without waiting for the previous call to complete), like this:

If you trace the program flow with your finger, you will see that if the customer correctly authenticates their account, and has at least 1000 units of credit available to pass the initial balance check, then if they trigger a transaction by issuing a call company.withdraw(account,1000,customer.contract), the flow of code will go like this:

C.R.E.A.M. (which really is an abbreviation, as the dots imply, that stands for Crypto Rules Everything Around Me), has said simply that it has “stopped the exploit by pausing supply and borrow on AMP”, where AMP is the cryptocurrency system where the company’s bug was abused, and advised: “Post-mortem to come”.