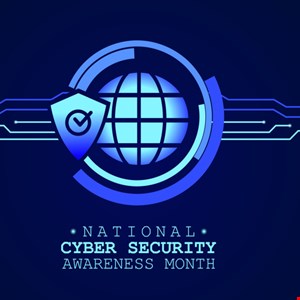 Today marks the start of the 18th Annual Cybersecurity Awareness Month in America, and this year’s theme is “Do Your Part. #BeCyberSmart.”

The digital safety initiative was launched back in October 2004 by the National Cyber Security Alliance and the United States Department of Homeland Security to help the public stay safe and secure while online.

More recently, the annual event has become a major operation, bringing its message to consumers, small and medium-sized businesses, corporations, educational institutions, and young people all over the country.

“Since the combined efforts of the National Cyber Security Alliance and DHS have been taking place, the month has grown in reach and participation,” said the Alliance.

“Operated in many respects as a grassroots campaign, the month’s effort has grown to include the participation of a multitude of industry participants that engage their customers, employees, and the general public in awareness, as well as college campuses, nonprofits, and other groups.”

Like the previous long-running theme of the annual event, “Our Shared Responsibility,” this year’s “Do Your Part. #BeCyberSmart” motif emphasizes the need for individuals to actively bolster their own cybersecurity.

“This evergreen theme encourages individuals and organizations to own their role in protecting their part of cyberspace, stressing personal accountability and the importance of taking proactive steps to enhance cybersecurity,” said the Cybersecurity and Infrastructure Security Agency (CISA).

A sub-theme has been attached to each week in October by the event’s organizers, starting with best security practices and general cyber hygiene. In the second week, the emphasis will be on phishing attacks, which, according to a 2019 data breach report by Verizon, account for more than 80% of reported security incidents.

Week three will highlight the Cybersecurity Career Awareness Week led by the National Initiative for Cybersecurity Education (NICE). As a finale, the event will focus on making security a priority for both businesses and individuals.

Are you in control of your personal data? – Week in security with Tony Anscombe
Multiple Vulnerabilities Found In Healthcare Software OpenEMR
Why your data is more valuable than you may realize
Mastodon vs. Twitter: Know the differences
QNAP Fixes Critical Vulnerability in NAS Devices with Latest Security Updates