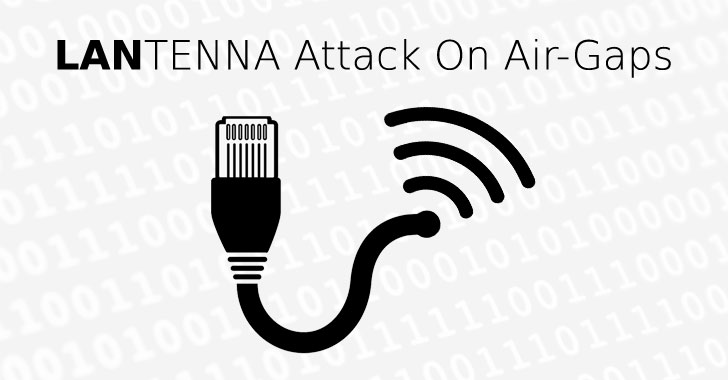 A newly discovered data exfiltration mechanism employs Ethernet cables as a “transmitting antenna” to stealthily siphon highly-sensitive data from air-gapped systems, according to the latest research.

“It’s interesting that the wires that came to protect the air-gap become the vulnerability of the air gap in this attack,” Dr. Mordechai Guri, the head of R&D in the Cyber Security Research Center in the Ben Gurion University of the Negev in Israel, told The Hacker News.

Dubbed “LANtenna Attack,” the novel technique enables malicious code in air-gapped computers to amass sensitive data and then encode it over radio waves emanating from Ethernet cables just as if they are antennas. The transmitted signals can then be intercepted by a nearby software-defined radio (SDR) receiver wirelessly, decode the data, and send it to an attacker who is in an adjacent room.

“Notably, the malicious code can run in an ordinary user-mode process and successfully operate from within a virtual machine,” the researchers noted in an accompanying paper titled “LANTENNA: Exfiltrating Data from Air-Gapped Networks via Ethernet Cables.”

Air-gapped networks are designed as a network security measure to minimize the risk of information leakage and other cyber threats by ensuring that one or more computers are physically isolated from other networks, such as the internet or a local area network. They are usually wired since machines that are part of such networks have their wireless network interfaces permanently disabled or physically removed.

This is far from the first time Dr. Guri has demonstrated unconventional ways to leak sensitive data from air-gapped computers. In February 2020, the security researcher devised a method that employs small changes in LCD screen brightness, which remains invisible to the naked eye, to modulate binary information in morse-code-like patterns covertly.

Then in May 2020, Dr. Guri showed how malware could exploit a computer’s power supply unit (PSU) to play sounds and use it as an out-of-band, secondary speaker to leak data in an attack called “POWER-SUPPLaY.”

Lastly, in December 2020, the researcher showed off “AIR-FI,” an attack that leverages Wi-Fi signals as a covert channel without requiring the presence of Wi-Fi hardware on the targeted systems.

The LANtenna attack is no different in that it works by using the malware in the air-gapped workstation to induce the Ethernet cable to generate electromagnetic emissions in the frequency bands of 125 MHz that are then modulated and intercepted by a nearby radio receiver. In a proof-of-concept demo, data transmitted from an air-gapped computer through its Ethernet cable was received at a distance of 200 cm apart.

As countermeasures, the researchers propose prohibiting the use of radio receivers in and around air-gapped networks and monitoring the network interface card link layer activity for any covert channel, as well as jamming the signals, and using metal shielding to limit electromagnetic fields from interfering with or emanating from the shielded wires.

“This paper shows that attackers can exploit the Ethernet cables to exfiltrate data from air-gapped networks,” the researchers said in the paper. “Malware installed in a secured workstation, laptop, or embedded device can invoke various network activities that generate electromagnetic emissions from Ethernet cables.”

“Dedicated and expensive antennas yield better distance and could reach tens of meters with some cables,” Dr. Guri added.