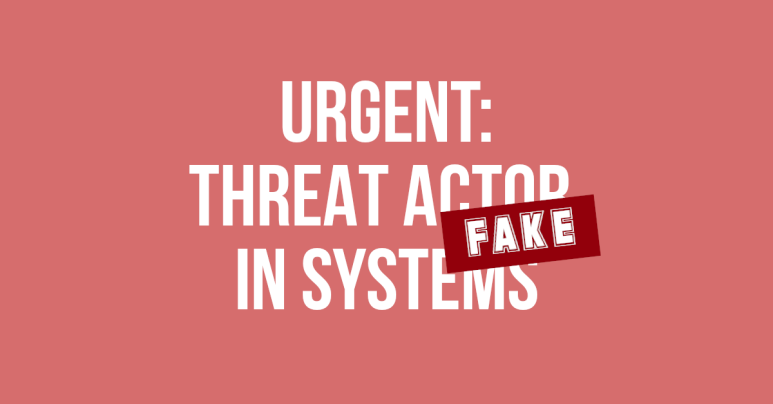 Well-known email tracking organisation Spamhaus, which maintains lists of known senders of spams and scams, is warning of a fraudulent “FBI/Homeland Security” alert that has apparently been widely circulated to network administrators and other IT staff in North America.

Indeed, some of our own colleagues have reported receiving messages like this: 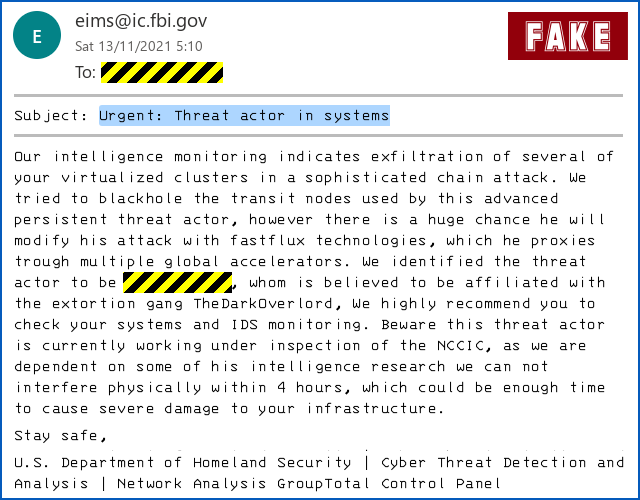 Spamhaus suggests that at least some of the recipients’ email addresses have been scraped from already public sources such as databases published by ARIN, the [North] American Registry for Internet Numbers.

Note that this does’t imply that ARIN has suffered any sort of breach.

It is merely evidence that the crooks behind this disinformation campaign have focused primarily on email addresses that seem to be associated with network adminstration, in the same way that contact email addresses picked deliberately from podcast feeds would probably go to people who record or produce podcasts.

Intriguingly, the fake messages don’t include any attachments, phone numbers or web links, making it unlikely that your email filter would consider them risky because of any so-called calls to action they contain.

But the text in the email consists of a bunch of technobabble that looks scary at first sight, including sentences like this:

Our intellience monitoring indicates exfiltration of several of your virtual clusters in a sophisticated chain attack.

We recommend you check your systems and IDS monitoring.

As you can see in the screenshot above, the email also plausibly suggests that US law enforcement and security services can’t currently blocklist or take down the servers being used by the “attackers” for at least four hours, because they need to keep those servers online as part of an intelligence gathering operation.

In other words, you’ve been warned, but you’re on your own, so Do Something At Once.

The rogue messages, redacted above, also explicitly name a perpetrator, claiming that he belongs to the cybercrime clan known as Dark Overlord.

As you probably know, it’s most unlikely – both for operational and legal reasons – that the US authorities would name and shame an alleged perpetrator up front, while active surveillance was still in place, and no charges had been presented to or unsealed by a court.

The person named, as it happens, is a cybersecurity researcher who has published a book entitled Hunting Cyber Criminals, including Dark Overlord.

Occasionally, for example if you become aware of a looming ransomware attack in your own network, or if there’s a sudden global cybersecurity issue such as the Heartbleed bug, you may need to divert your cybersecurity experts in order to deal with the emergency.

But don’t let yourself get distracted by Joe Job messages of this sort – “fake news” like this is not only unfair to the people who are accused in it, but also potentially disruptive to your own cybersecurity protection.