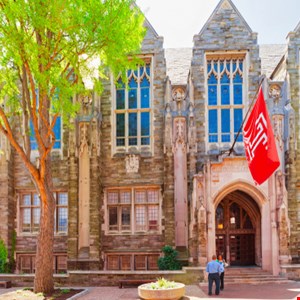 The former dean of a business school in Philadelphia has been found guilty of involvement in a fraudulent scheme to doctor program rankings using false data.

Moshe Porat, of Bala Cynwyd, Pennsylvania, was dean of Temple University’s Richard J. Fox School of Business and Management for more than two decades, from 1996 until 2018.

On Monday, a jury found 74-year-old Porat guilty of scheming to deceive the school’s applicants, students, and donors into believing that the school offered top-ranked business degree programs, so that they would pay tuition and make donations to Temple.

“This case was certainly unusual, but at its foundation it is just a case of fraud and underlying greed,” said US Attorney Jennifer Arbittier Williams.

From 2014 to 2018, Porat colluded with Fox professor Isaac Gottlieb and a Fox employee named Marjorie O’Neill to give false data to US News & World Report about the school’s online MBA (OMBA) and part-time MBA (PMBA) programs.

Among other things, the conspirators lied about the number of Fox’s OMBA and PMBA students who had taken the Graduate Management Admission Test, the average work experience of Fox’s PMBA students, and the percentage of students who were enrolled part time.

“Porat boasted about these rankings in marketing materials directed at potential Fox students and donors. Enrollment in Fox’s OMBA and PMBA programs grew dramatically in a few short years, which led to millions of dollars a year in increased tuition revenues,” said the US Attorney’s Office for the Eastern District of Pennsylvania.

Porat was charged in April with one count of conspiracy to commit wire fraud and one count of wire fraud. He was convicted of both counts on Monday. Porat now faces a fine of $500K and a maximum custodial sentence of 25 years.

Gottlieb and O’Neill are each charged with one count of conspiracy to commit wire fraud.

Stephen Orbanek, a university spokesperson, said in a statement to The Temple News: “The evidence presented at the trial speaks for itself but is not representative of Temple or the overwhelming majority of the thousands of educational professionals serving our students.”