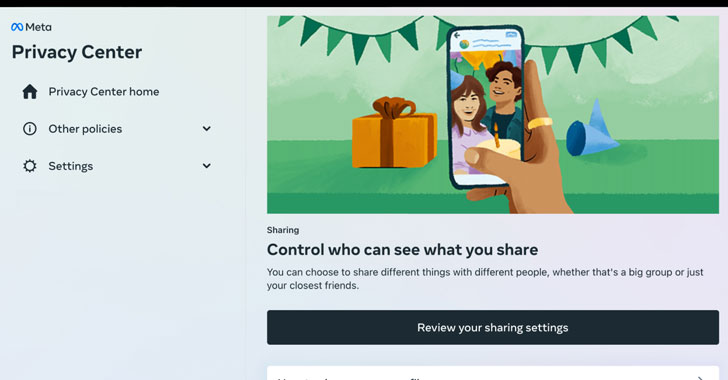 Meta Platforms, the company formerly known as Facebook, on Friday announced the launch of a centralized Privacy Center that aims to “educate people” about its approach with regards to how it collects and processes personal information across its family of social media apps.

The first module, Security, will offer easy access to common tools such as account security settings and two-factor authentication. Sharing will provide specifics about post visibility and settings to archive or trash old posts. Collection and Use will give users a quick glance into the type of data Meta harvests and learn how and why it’s used, respectively. Lastly, the Ads section will furnish information regarding a user’s ad preferences.

The learning hub is expected to be initially limited to a small pool of people using Facebook on desktop in the U.S., with plans to roll it out to a broader set of users and more of its apps in the coming months. Users part of the pilot will be able to access Privacy Center by navigating to Settings and Privacy on the desktop version of Facebook.

Privacy Center joins a plethora of other tools already offered by the tech giant, including Privacy Shortcuts and Privacy Checkup, both of which guide users through some of the privacy and security settings on the platform and review their choices. Where the new feature differs is that it hopes to serve as a one-stop place to navigate the myriad privacy and security controls available across Facebook, Instagram, and WhatsApp.

Over the years, Facebook’s privacy controls have emerged as a magnet for controversy for being confusing to the point of not being useful enough to protect users’ data, not least driven by labyrinthine menus and obtuse wording that are designed to push users away from making privacy-friendly choices on its service.

The so-called “dark patterns” — subtly coercive user interface design — came under the spotlight in June 2018, when a report by the Norwegian Consumer Council, titled Deceived by Design, revealed how “default settings and dark patterns, techniques and features of interface design meant to manipulate users, are used to nudge users towards privacy intrusive options.”

A subsequent study of Facebook’s desktop user interface undertaken by researchers from the University of Bremen in March 2021 noted that “the way in which Facebook handles control over privacy settings sets an example for a novel dark pattern,” adding by “placing all privacy settings behind several interface layers, Facebook actively offers a well designed but incomplete alternative to handle them.”