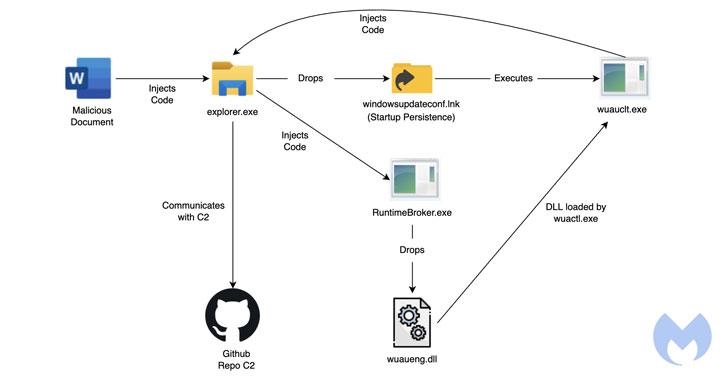 The notorious Lazarus Group actor has been observed mounting a new campaign that makes use of the Windows Update service to execute its malicious payload, expanding the arsenal of living-off-the-land (LotL) techniques leveraged by the APT group to further its objectives.

Opening the decoy Microsoft Word file triggers the execution of a malicious macro embedded within the document that, in turn, executes a Base64-decoded shellcode to inject a number of malware components into the explorer.exe process.

In the next phase, one of the loaded binaries, “drops_lnk.dll,” leverages the Windows Update client to run a second module called “wuaueng.dll.” “This is an interesting technique used by Lazarus to run its malicious DLL using the Windows Update Client to bypass security detection mechanisms,” researchers Ankur Saini and Hossein Jazi noted.

The cybersecurity firm characterized “wuaueng.dll” as “one of the most important DLLs in the attack chain,” whose main purpose is to establish communications with a command-and-control (C2) server – a GitHub repository hosting malicious modules masquerading as PNG image files. The GitHub account is said to have been created on January 17, 2022.

Malwarebytes said that the links to Lazarus Group are based on several pieces of evidence tying them to past attacks by the same actor, including infrastructure overlaps, document metadata, and the use of job opportunities template to single out its victims.

“Lazarus APT is one of the advanced APT groups that is known to target the defense industry,” the researchers concluded. “The group keeps updating its toolset to evade security mechanisms. Even though they have used their old job theme method, they employed several new techniques to bypass detections.”